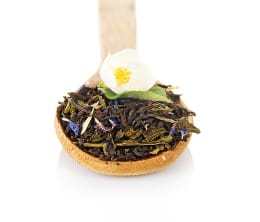 Flavored teas are teas that have had something added to them such as flowers, herbs, or spices that provide additional flavor.  Some flavored teas, if you look at the back of the packaging, might also have extracts or flavoring agents added in order to enhance the taste of the tea.  There are many flowers that are traditionally added to teas to give them a distinct aroma and taste.  Traditional flowers include:

In addition to flowers, there are some flavored teas that have herbs, citrus or spices added to them.  Some of the most popular include:

These are just a sample of popular flavored teas.  With so many flavored teas on the market today, you can certainly find one that you will enjoy!