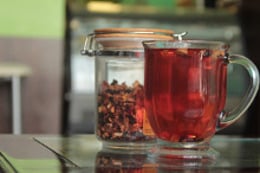 No matter the time of the day, I can never resist a good cup of hot tea. Sometimes, that fondness for tea costs me dearly because sometimes I’ll drink a strong cup of Earl Grey right before bed and end up being wide awake until early in the morning.

Different teas with different caffeine levels can affect people differently though, but for me, I do my best to keep my chest of caffeine-free loose leaf tea well-stocked.  While the following teas are technically not true “teas” from the camellia sinensis plant, they are nonetheless considered teas by a lay person.

Types of Teas without Caffeine

You’ll see a lot of black, green and white teas marketed as “decaf” but in fact it is not possible to decaffeinate tea entirely and so decaf teas do contain trace amounts of caffeine. Most regular tea drinkers won’t be affected by these minute quantities of caffeine, but if you’re unusually sensitive to caffeine, you might want to stick to herbal teas in the evenings. Herbal teas like rooibos or chamomile do not come from the camellia sinensis plant as black, green and white teas do, but they are naturally caffeine-free and some can purportedly enhance sleep quality.

Chamomile (or camomile) is a particularly good choice for a night-time drink as it contains a compound known as apigenin which reduces locomotor activity, producing a calming effect and also sleep-inducing effect. If you have just had a heavy meal, peppermint tea is another fantastic option as it helps prevent indigestion, an upset stomach and acid reflux, all of which can completely ruin a good night’s sleep.

Check out the Herbal Tea samplers at Amazon

There are three methods by which tea can be decaffeinated. The first of these is known as the Swiss Water process. This tends to leave the tea rather bland and strips the tea of some antioxidants. The second involves the use of a chemical solvent such as methylene chloride and ethyl acetate. While this preserves the original taste of the tea, it’s impossible to completely remove the solvent from the tea leaves and so you’ll almost inevitably end up ingesting small quantities of solvents with your tea although the levels of solvent are regarded as safe for human consumption.

The third method, involves pressure-cooking the tea leaves with carbon dioxide so that the carbon dioxide molecules bind to the caffeine particles and removes them. It is said that this method leaves the natural taste of the tea more intact than others and retains more of the health components than the other two methods.  (Although if you drink tea for its health benefits it has been suggested that the decaffeinated methods reduces the amount of health promoting compounds found in tea compared to real tea).

Click on this link for Caffeine Free Tea from Amazon

Fruit teas are also great teas without caffeine (although again not technically a true “tea”).  As the name suggests, fruit teas are beverages derived from fruits, are caffeine-free, and most of these teas do not contain added sugar. Tea companies will offer teas that are a blend of various fruits and add a catchy name to really draw the tea lovers to the flavors.  Berry combinations seem to be popular among many tea companies.

Do remember to check the ingredient list of your herbal tea and fruit teas carefully. It is not uncommon to see teas that are marketed as herbal or fruit teas online but do in fact contain white, green or black tea which as we know, contains caffeine.

Of course if you do enjoy caffeinated tea but are worried you can’t sleep at night, avoid drinking tea after 3 pm, and then enjoy loose leaf tea herbal, decaffeinated or fruit teas without caffeine!

Check out the fruit teas at Amazon