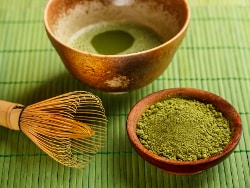 The debate continues to rage – is matcha tea actually superior to traditional green tea leaves? Matcha tea has experienced a real surge in popularity over the past decade. This Japanese green tea is cultivated in highly specialized conditions designed to concentrate flavor and preserve antioxidants. Numerous studies have shown that if your primary purpose in drinking green tea is to harness its manifold health benefits, matcha tea may be the best option for you.

What is Matcha Tea?

Matcha consists of green tea leaves that have been cultivated in a shady environment, handpicked for their vibrant color and wonderful aroma and then hand-ground by a licensed Japanese tea expert to form an exceptionally fine-grained powder that dissolves in water.  It is the only form of tea where the entire leaf is consumed.

It’s very important to distinguish matcha tea from powdered green tea. The two are often confused because matcha tea is often marketed as “matcha powder.” Powdered green tea simply consists of tea leaves that have been shredded and then cut to a fine dust in a factory for use in tea bags. It is to be avoided at all costs – the coarse grinding process destroys all the antioxidants in the tea leaves and robs them of most of their flavor.

What are some matcha tea benefits?

A 2003 University of Colorado study found that a cup of matcha green tea might contain as many as 137 times more EGCG (an antioxidant) when compared to a common Chinese green tea called Green Tip, and at least three times the amount compared to other green teas.  Many sites claim that a glass of matcha tea equals about 10 glasses of green tea in nutrients and antioxidants.

The theory is that cultivating matcha tea leaves in the shade allows antioxidants and amino acids to flourish.  The health benefits have also been attributed to the fact that the whole tea leaf is ingested, as opposed to just the steeped water. This results in a much higher percentage of antioxidants.

That’s not the only benefit, though – the shady conditions have been found to enhance chlorophyll production and L-theanine levels. The former has been linked to weight loss and detoxification, while the latter exerts a calming influence on the body to balance the energizing effects of the caffeine in tea leaves.  It also contains almost no calories and contains trace vitamins and minerals, making it a great substitution for other unhealthy beverages with empty calories.  It has also been shown that it speeds up the metabolism for several hours.

Health benefits aside, matcha tea is also renowned for its sweeter flavor, so it’ll be an interesting experience for your palate. The next time your green tea reserves start to run a little low, think about jumping on the matcha tea bandwagon!